A catch up with the Paddling Paramedic

A catch up with the Paddling Paramedic

Please consider donating to the worthy cause

As we’re sure you’re all aware, Joe, the Paddling Paramedic, is embarking on the big challenge of crossing the English channel, all in aid of The OLLIE Foundation. With the date right around the corner, we wanted to catch up with him to find out his progress.

We’ve pitched five questions to Joe, have a read through his answers below.

September is fast approaching, do you feel ready for the challenge?

The months have flown by, I have been working so hard on my fitness and paddling but faced so many hurdles. Physically I feel strong, mentally I feel anxious but excited. I do feel ready for the crossing but having now spent some time on the sea I have a greater understanding of the beast I’ve committed to. In the next few weeks, I have another crossing planned to the IOW, I also have a long-distance still water planned to build up my stamina.

What has been the biggest hurdle you’ve faced when training for the challenge?

Some of my challenges have included finding time to commit to training, social media, interviews, work and spending time with the family. The biggest challenge came after a horsefly bite I received whilst training, my foot became infected and ballooned in size. The foot became seriously infected and I was in hospital on meds. Timings couldn’t have been worse as I committed to a crossing with the BBC whilst this was going on.

The crossing day came, and I was committed to doing it, the plan was to cross as fast as I could so the BBC could get their footage, I could then rest in the IOW and the BBC could head back. The crossing was horrendous, waves and swell left to multiple falls and I felt exhausted. We reached the IOW and the producer asked me to turn back as they would like more footage. Instead of saying no, resting, hydrating, eating etc I said yes and span the board round.

Within minutes I knew this was a silly and dangerous thing to do, I felt so ill, my breathing was bad, my foot was huge and I had no energy. I fell off 4 times and on the 4th fall, I struggled to get back on the board. I was done! I was towed back to Southampton feeling defeated. I was interviewed back on shore and even that went bad. The footage will be on the BBC in the first week of August!

What has been the most rewarding part of the challenge, so far?

I paddled in Hunstanton last weekend, the sea was like a mill pond. I paddled out as far as I felt safe and stopped to enjoy the views. I instantly felt I was not alone, something BIG was in the water. As I stood still I looked down and noticed a huge creature swim under my board. I remained still and all of a sudden a seal swam alongside my board touching the side as if it was scratching his back. My board is 14ft and I reckon the seal was 8ft. He popped his head up and I could see water droplets on his whiskers. He was no threat at all, it was a beautiful moment I will never forget.

I also met with the sister of one of my colleagues who ended his life this year, it was an incredible meeting in many ways and I have gained a greater understanding of the ripple effect for families and friends when someone takes their life early. I plan to do much more work with Sarah going forward. I have also been invited to do a couple of talks after the crossing and this is something I’m really keen to do.

Tell us what your experience of visiting parliament was like.

The laughing paramedic video has had 17m views so far and gained interest from all over the world. We were invited into parliament to speak to MP’s about life as a paramedic. It was an incredible day that money couldn’t pay for. We had a tour of Parliament, sat in a health and social debate and enjoyed a drink in Strangers Bar. One of the best days ever. I used the opportunity to talk about my crossing, PTSD and the OLLIE Foundation. The two Labour MP’s have assured me that they will ensure their teams will sign up for the Talk Safe, Plan Safe course. That made my day. 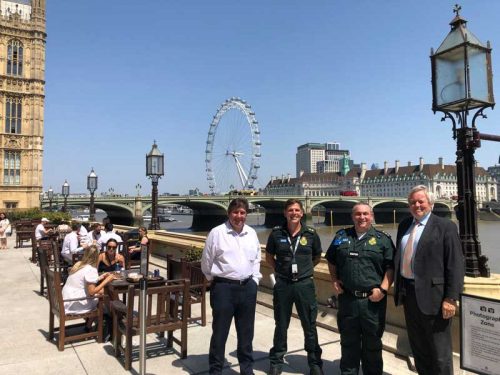 How much have you raised so far?

We are nearly at £5.5k which is incredible, the clothing range really helped and I see the hoodies everywhere which is cool. We raised £1,300 at Tesco and I still have a classic guitar to auction. I’m hoping to do a big push leading up to the big day.

This website uses cookies to improve your experience while you navigate through the website. Out of these, the cookies that are categorized as necessary are stored on your browser as they are essential for the working of basic functionalities of the website. We also use third-party cookies that help us analyze and understand how you use this website. These cookies will be stored in your browser only with your consent. You also have the option to opt-out of these cookies. But opting out of some of these cookies may affect your browsing experience.
Necessary Always Enabled
Necessary cookies are absolutely essential for the website to function properly. These cookies ensure basic functionalities and security features of the website, anonymously.
Functional
Functional cookies help to perform certain functionalities like sharing the content of the website on social media platforms, collect feedbacks, and other third-party features.
Performance
Performance cookies are used to understand and analyze the key performance indexes of the website which helps in delivering a better user experience for the visitors.
Analytics
Analytical cookies are used to understand how visitors interact with the website. These cookies help provide information on metrics the number of visitors, bounce rate, traffic source, etc.
Advertisement
Advertisement cookies are used to provide visitors with relevant ads and marketing campaigns. These cookies track visitors across websites and collect information to provide customized ads.
Others
Other uncategorized cookies are those that are being analyzed and have not been classified into a category as yet.
SAVE & ACCEPT
Powered by